Learn all about the health benefits of coconut (including raw coconut, coconut oil, and coconut water) for your brain and body. In addition to being wonderful for your skin and hair, it also helps prevent some rather serious diseases!

Are you ready to supercharge your health through a whole, natural, organic foods diet? Dubbed the “tree of life” in many cultures, the coconut is definitely one of those foods to add to your “must eat” list. In fact, the health benefits of coconuts are truly astounding!

It’s an incredibly versatile food, so there are many different ways to work it into your diet. It also has amazing benefits for your skin, hair, and body.

So, whether you’re a whole foods “newbie” or you’ve been striving to follow a clean foods diet for quite some time, there’s something in this article for you. Read on for some coconut-infused inspiration to improve your health!

How Coconuts Benefit Your Health:
A Brief Overview

We’ll look at the specific health benefits of coconuts more in-depth throughout the rest of this article, but here’s a quick overview:

The nutritional value of a coconut is overwhelmingly valuable. It is a great source of manganese, which your body needs to metabolize carbohydrates, cholesterol, and proteins properly. Your body also uses manganese to keep your bones strong and healthy.

Both dried and raw coconut “meat” is rich in selenium, a type of antioxidant that defends your cells. They’re also great sources of copper and iron.

Coconuts are also rich in important minerals like selenium, phosphorous, magnesium, sodium, and iron. They also deliver a healthy dose of Vitamins C, E, B.

Additionally, coconuts have a lot of natural fiber. This natural fiber promotes healthy digestion, helps lower your risk of developing heart disease, and keeps your cholesterol levels in check.

The Many Faces of Coconut

Raw coconut is wonderfully delicious and satisfying when mixed in with oatmeal, sprinkled over pancakes, or integrated in an ultra-healthy muesli mix. But the benefits of coconut “meat” is just the beginning. There are also unique aspects of coconut milk, coconut oil, and coconut water.

Coconut milk, which is made from the meaty party of the coconut, carries with it all the minerals, vitamins, and nutrients present in raw coconut. Many health food stores sell coconut milk, but it’s quite simple to make it at home, too. This is a sure-fire way to get the purest coconut milk that is free from preservatives.

How Many Calories in Coconut Milk?

There are 551 calories in one cup of coconut milk. While this is a lot, there are a lot of nutrients packed in there! Luckily, there are plenty of recipes with coconut that don’t require such a large serving size. Therefore, it’s best to use smaller portions of coconut milk in recipes instead of drinking a full cup. For example, you can use 1/4 to 1/2 a cup of coconut milk with a bowl of muesli. It’s also a popular ingredient in smoothie bowls, but a much smaller amount is used. Furthermore, all you need is a dollop of coconut milk whipped cream to enjoy its decadence.

Interested in making homemade coconut milk? In the video below, you can see how Lisa (co-founder of Mu Mu Muesli) makes coconut milk at home from organic unsweetened medium shredded coconut and water.

Here are some further recommendations for coconut milk recipes:

When the meaty portion of a coconut is dried, it is called “copra.” Typically, the copra is mechanically pressed to separate the oil from the coconut “meat.” Coconut oil is often used as a natural moisturizer for dry skin, a soothing lip balm, or a conditioning hair mask. The secret behind coconut oil’s healing effects on your hair and skin? Vitamin E.

Unhealthy types of saturated fat have long-chain fatty acids. Simply put, this type of fat is more difficult for the body to break down. In contrast, coconut oil consists of short- and medium-chained fatty acids. The body digests and absorbs these types of fatty acids much more easily.

Unlike raw coconut or coconut oil, coconut water comes from green, young coconuts. This beverage is naturally sweet, has a somewhat nutty flavor, and is a powerfully re-hydrating beverage. In fact, one serving size has about as much potassium as four bananas!

When I first moved to Brooklyn after living in Michigan all of my life, the summers were especially tough. My body just wasn’t accustomed to such high temperatures, and I couldn’t believe how much I was sweating! I remember fainting on more than one occasion after going for a jog or even after a long, sweaty commute in an un-air conditioned subway car.

There are studies showing that coconut diminishes belly fat. Excess belly fat is a contributing risk factor for heart disease and diabetes, and so it makes sense that coconut could help prevent heart problems.

Out of desperation, I swapped plain water for coconut water in the morning and evening. I felt relief almost immediately, and the fainting and dizziness stopped!

Coconut water has also been shown to be beneficial for pregnant women for the following reasons:

The Health Benefits of Coconuts Are Truly Astounding
(And There Are Many Scientific Studies to Support This Claim!)

Now that we’ve looked at the various forms of coconut oil, let’s take a closer look at the health benefits of coconut, including scientific studies that support these claims. You may be surprised!

May Reduce Symptoms of IBS

If you suffer from IBS-related symptoms, then take heart: coconut may offer natural relief! According to the Gastroparesis and Dysmotilities Association, both coconut meat and coconut oil can slow down gut activity, thereby reducing symptoms.

Finally, coconuts are another natural source of healthy fats. Since the fat in coconuts is composed of medium-chain fatty acids (triglycerides), it can actually help treat obesity.

How’s that for a tasty weight loss snack?!

As I mentioned above, the manganese in coconut helps the body metabolize cholesterol correctly. There are actually a few small studies examining populations of people who ate lots of coconut. In sum, the results are inconclusive, and one study even concludes that coconuts don’t really effect cholesterol at all.

Remember the medium-chain fatty acids mentioned above? As previously discussed, these are a more favorable form of saturated fat that the body absorbs and digests with ease. When they are metabolized by the liver, they are converted to ketones. According to the British Journal of Nutrition, ketones are a valuable energy source for the brain, and they may be helpful for people who either suffer from Alzheimer’s Disease or who are starting to show signs of memory impairment.

Additionally, the hormones and phenolic compounds found in coconut oil help prevent β-amyloid peptide buildup in the brain. As discussed in The 9 Life-Changing Benefits of Dates, β-amyloid peptide is a substance that can accumulate in the brain over time. Excess amounts of β-amyloid peptide between your brain cells impairs their ability to communicate with each other, which can ultimately lead to Alzheimer’s Disease or significant memory loss.

If you’re looking for a food rich in whole ingredients that helps fight brain disorders, organic Mu Mu Muesli is an excellent option. It contains both dates and coconut!

Studies suggest that coconuts contain nutrients that help treat hypertension, lower levels of “bad” cholesterol, and are beneficial for insulin resistance. These are all conditions that, when left untreated, may lead to heart disease or diabetes.

For a specific example of coconut oil’s anti-diabetic effects via its antioxidants, consider this study published in the Journal of Diabetes Mellitus. The study found that virgin coconut oil significantly reduces oxidative stress in male rats with Type I Diabetes, which has exciting implications for humans with diabetes!

Inspired By the Health Benefits of Coconuts?
Here’s What You Should Do

Clearly, coconuts have many health benefits! But how can you work them into your diet without getting tired with the “same old, same old” routine?

Here are some helpful tips and resources for incorporating coconuts into your individual health plan:

What’s your favorite way to consume coconut? Did we leave out one of your favorite coconut recipes? Please let us know by leaving a comment below!

People who liked “The 9 Amazing Health Benefits of Coconuts” also loved:
High Fiber Breakfast Foods for the Natural Energy Your Mind + Body Craves
What You DON’T Want to Find in Your Cereal Bowl

Kathryn is a freelance blogger with a keen interest in natural wellness and all that encompasses: holistic nutrition, alternative medicine, and the undeniable interconnectedness of mind, body, and spirit. She holds a Bachelor of Arts in English Literature & Writing from Northern Michigan University and spends her free time reading, admiring her cat Achilles, playing the piano, and striving to be as authentic as possible.

The Only High Fiber Foods List You’ll Ever Need

In past blog posts, we've covered important topics like healthy fats and the best vegan food sources of protein. Now it's time to examine another pillar of clean eating: examples of foods high in dietary fiber. 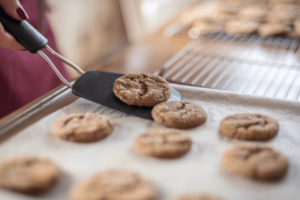 All too often, people assume muesli has one purpose: to be cereal in a bowl with coconut or hemp milk. While this certainly is one delicious and easy way to enjoy it, there are many more ways to prepare muesli! For example, muesli bars are delicious, and so are overnight oats. And don't forget acai smoothie bowls, which taste best with a light sprinkling of Mu Mu Muesli on top. Yet another example of how to eat muesli is the classic combination of muesli with yogurt and fruit. In an upcoming blog, we'll explore all of those different recipes as well as several more. But for now, let's search for the perfect vegan muesli cookies.

Is Muesli a Healthy Snack?

Here’s why muesli is a healthy snack, thanks to whole[...]